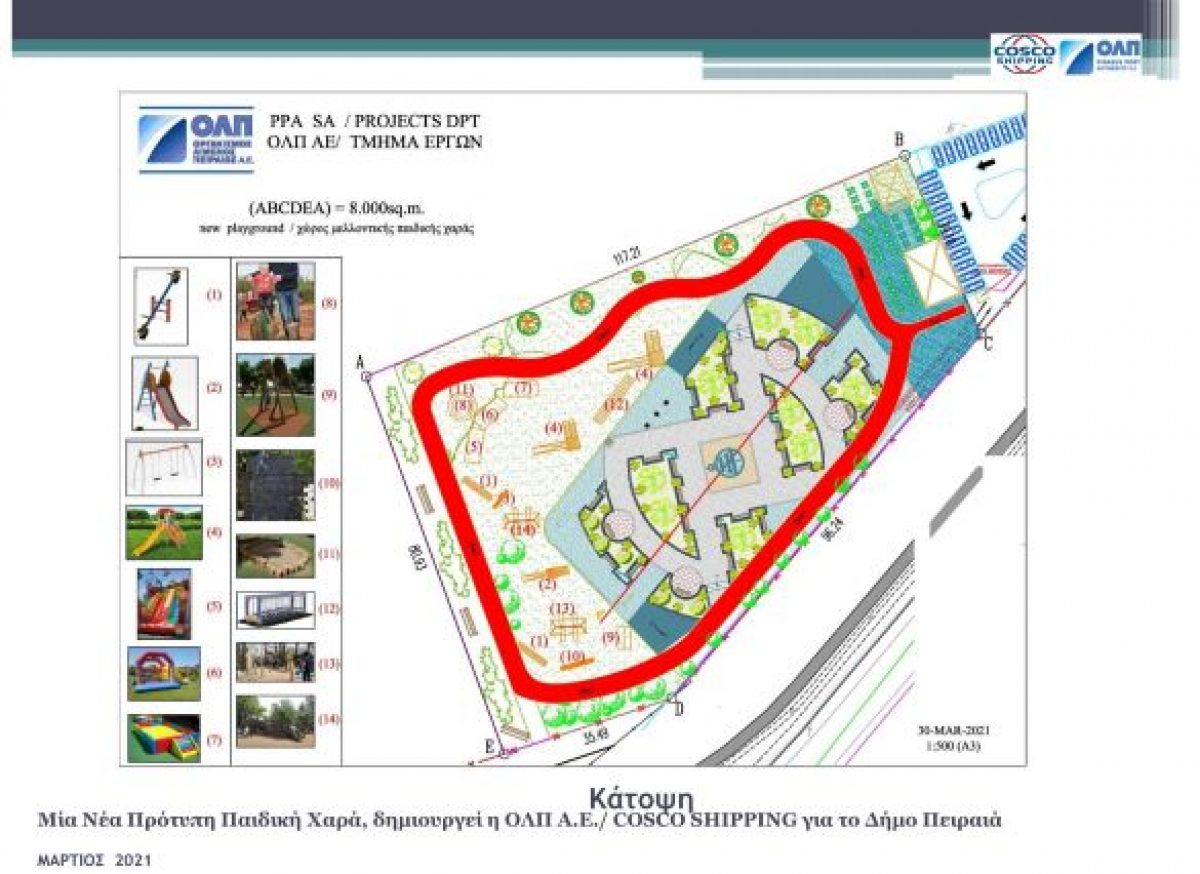 PPA S.A./ COSCO SHIPPING creates a new modern Playground Park and a bike lane for the Municipality of Piraeus

PPA S.A./ COSCO SHIPPING creates a new modern Playground Park and a bike lane for the Municipality of Piraeus

PPA S.A. as an actively participating company in the local community, taking seriously its Corporate Social Responsibility, announces the construction of a new modern playground park and a bike lane inside the port zone at the cruise terminal area, which will be available for all the citizens to visit and enjoy its recreational spaces. The construction cost will be covered by Piraeus Port Authority.
More specifically, PPA will transform an area of 8,000 sq. m. (without including the additional parking area) of the cruise terminal to an open space and modern playground park based on high environmental and security standards, which will meet the needs of the citizens of the surrounding area. The access to the new playground park may be accomplished on foot, using public transportation or by car, as a parking area with 50 parking slots will be located near the playground park.
PPA Chairman Yu Zenggang met today the Mayor of Piraeus Mr. Ioannis Moralis in the presence of Deputy Minister of Shipping and Insular Policy Mr. Kostas Katsafados in the Piraeus city hall and presented the project proposal. As Chairman Yu stated: “PPA is always seeking to support the local communities and to improve the living standards of the citizens of the surrounding municipalities. Upon the completion of this project all citizens will have access to a beautiful area of the port and families will be able to enjoy with safety their visit at the port of Piraeus”.
The Mayor of Piraeus Mr. Ioannis Moralis thanked the PPA Chairman for this important move of PPA S.A./ COSCO SHIPPING, stating: "Today is a day of joy for Piraeus. The PPA Chairman announced that he intends to create at the Municipality of Piraeus a modern park of 10 acres with an ultra-modern playground with parking area and other recreational spaces at the gate E12 in the cruise terminal area, with free access to all. It is important that the new recreational park will be created in this area, as the First Municipal Community is populous and does not have free spaces. This is an important action which shows that when there is cooperation between the Administration of the Municipality, the Administration of the port and the representatives of the government, our city can obtain benefits for the citizens. The port-city integration has always been an objective for the Municipality of Piraeus. I believe that with this modern park and the construction of hotels that are an optional investment, the port-city integration is gradually beginning to happen. Piraeus is changing to the best and I believe that in a 3-year period we will be able to claim, with the development of the cruise also, substantial benefits for our city. I would like to thank the Management of PPA and the Deputy Minister Mr. Katsafados for his important contribution. I hope that in the future we will have more similar synergies with the port Administration. Certainly, this does not mean that we will not insist on seeking solutions to environmental and traffic issues”.
The Deputy Minister of Shipping and Insular Policy, Member of Parliament Piraeus Α & Islands of New Democracy, Mr. Kostas Katsafados, stated: "I would like to congratulate PPA for its initiative. Both I and Mayor Yiannis Moralis, as well as the people of PPA, have proved that the cooperation between all, is the only way. That it can bring results for the benefit of the city, for the benefit of society. I hope that this project is just the beginning. We will continue even stronger, targeting at changing our city and our port to the best. For society, for our children, for our economy”.
At the meeting, from the PPA side presented the Acting CEO Mr. Zhang Anming, the Deputy CEO Mr. Angelos Karakostas and the President of the First Municipal Community of Piraeus Mr. Nikitas Golfis.

As a member of the big family of Piraeus, COSCO SHIPPING and PPA has always considered the benefit of the local communities as part of its own social responsibility and always has been cared for the welfare of citizens and friends, especially hoping to bring more happiness to children.

The investment and construction of the children playground in the Piraeus Port，is a new and innovative action to contribute to local families, beside of carrying out the Children Included education program, the support to families and the gifts during the holidays.

It is our honor to cooperate again with the municipality of Piraeus for the new initiative to the local community. PPA will fully bear all construction costs for the children playground. After the playground construction is completed, it will be available for operation and will be open to children and citizens of local communities free of charge. Our purpose is to provide a comfortable, healthy and happy place for local citizens for their leisure activity, to enrich the children lives and bring them more happiness.

According to our vision, PPA will build the playground in the cruise terminal area which is the most beautiful area in Piraeus port. It will be a high-standard children’s playground, effectively isolated from the cruise terminal to ensure the safety of the children. PPA will provide the parking area and the other ancillary facilities.

Next, the teams from both sides will work together closely to further improve the construction and operation plan, to fulfill the required approval procedures and carry out the project construction timely. I wish the citizen friends and children would like and enjoy the playground.

Video from the presentation with statements: https://bit.ly/3sDGnA5

View the embedded image gallery online at:
https://olp.gr/en/news/press-releases/item/12267-ppa-s-a-cosco-shipping-creates-a-new-modern-playground-park-and-a-bike-lane-for-the-municipality-of-piraeus#sigProIdd2795b939f
back to top