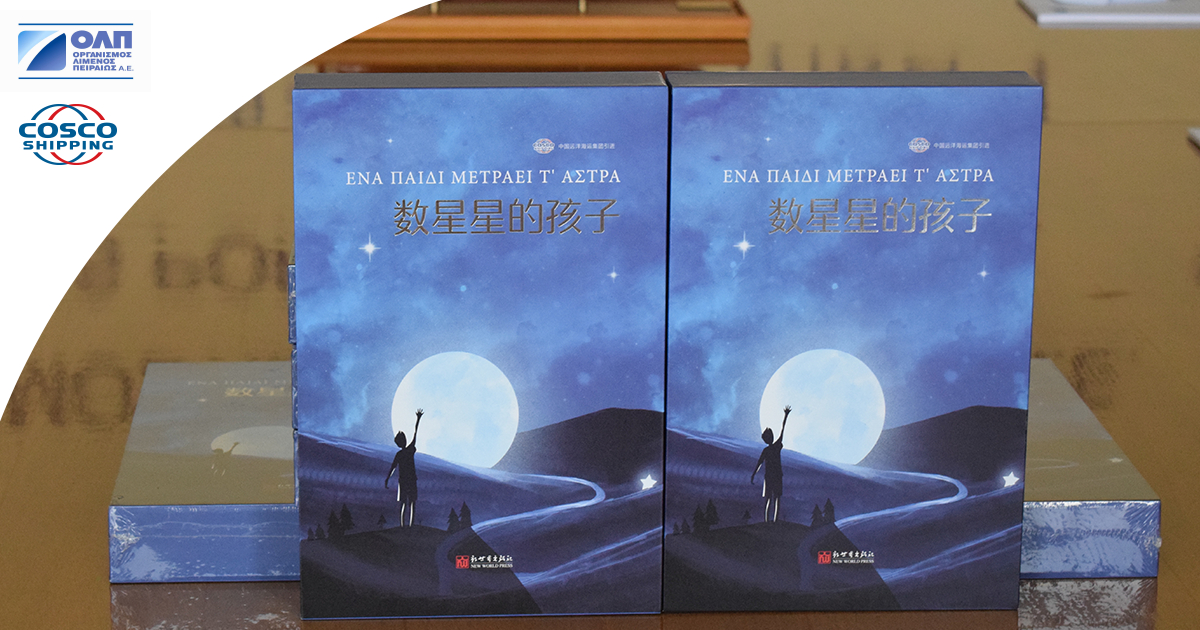 COSCO SHIPPING – Piraeus Port Authority: Joint initiative for the release of the popular Greek children’s novel “A Child Counts the Stars” in Chinese

COSCO SHIPPING and the Piraeus Port Authority have launched a joint initiative to release the autobiographical and the most popular novel of Menelaos Lountemis, “A Child Counts the Stars” in Chinese, by Patakis publishers.

The translation of this novel into Chinese, which is considered as one of the most beloved children’s novels that the Greek literature has to offer, captivating however readers of all ages, is a great initiative, significantly contributing to the dissemination of the Greek culture and the Greek thought through this literature genre to the Chinese people. The manifestation of the values of knowledge and constant effort, along with determination, patience, and perseverance and ultimately the beauty of life make this read unique in its kind and as such worth to be discovered also by China’s readership.

The joint initiative of COSCO SHIPPING and the Piraeus Port Authority showcase that synergies in one area, through investing for growth and modernization of the Piraeus Port, bring multiple benefits across the board, towards strengthening of the relationships and establishing strong ties between the two countries, Greece and China.

Mr. Yu Zenggang, Chairman of the BoD of PPA S.A. said: “COSCO SHIPPING and Piraeus Port Authority will carry on their joint activities through a variety of initiatives and synergies. Inspired by the novel of Menelaos Lountemis, based on learning, determination and overcoming of all difficulties and obstacles found in our way, we will keep constantly working towards taking Piraeus Port to a well-deserved place, a gateway to the world.”

During an event organized at COSCO SHIPPING offices in Beijing to promote this special initiative, Captain Xu Lirong, Chairman of COSCO SHIPPING, Greece's ambassador to Beijing, Mr. Georgios Iliopoulos and Ministers of the Chinese government have honored the event with their presence and addressed welcome messages to the participants.

View the embedded image gallery online at:
https://olp.gr/en/news/press-releases/item/12459-cosco-shipping-piraeus-port-authority-joint-initiative-for-the-release-of-the-popular-greek-children-s-novel-a-child-counts-the-stars-in-chinese#sigProIdfa0b1bfc2e
back to top